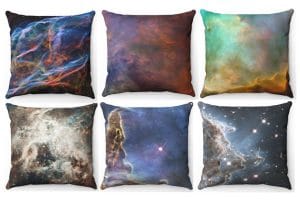 In celebration of the 24th anniversary of the launch of NASA’s Hubble Space Telescope (on April 24, 1990), astronomers have taken an infrared-light image of a turbulent region of star birth. The image unveils a collection of carved knots of gas and dust in a small portion of the Monkey Head Nebula (also known as NGC 2174). The nebula is a star-forming region that hosts dusty clouds silhouetted against glowing gas. Newly formed stars shine brightly, illuminating and heating the cloud to create the glowing gas of the nebula. Radiation and stellar winds from the region’s hottest stars eat away at the low-density gas of the cloud, often making tall pillar-like structures. This Hubble image studies a collection of such pillars within NGC 2174 using infrared light. Dense gas is generally opaque to visible light, appearing dark and relatively featureless in such images. Infrared light reveals more detail for two reasons: first, the longer wavelengths can penetrate deeper into the cloud, and second, some of the gas has been heated enough that it glows in infrared light. Particularly striking in this infrared view are the small, finger-like prominences scattered across the gaseous landscape. The bright edges show where the stellar radiation is being absorbed, and thereby outline the dense pocket of potential star formation. Most of the nebula is semi-transparent to infrared light, revealing stars both within and behind the gas cloud. Infrared light is also more efficient at observing small, cool stars, which emit much of their light at these longer wavelengths. In the background, many distant galaxies can be seen across the image. NGC 2174 is located about 6,400 light-years away in the constellation Orion. 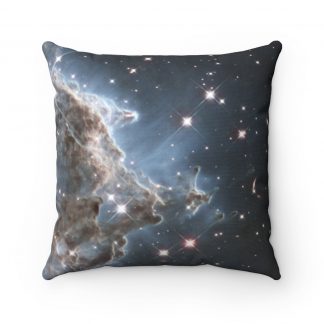